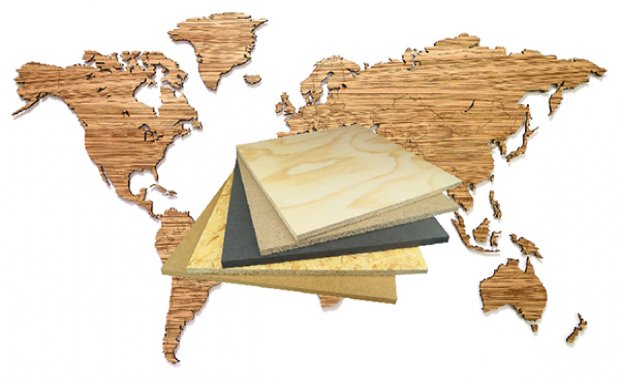 In 2016, the wood-based panels market grew to 408M cubic meters. After a slight reduction from 2008 to 2009, the market grew steadily through to 2016, however, the pace of growth decelerated over the last three years. In wholesale prices, the market accounted to $162B.

In value terms, the market showed a more pronounced dynamics – it contracted by 15% in 2009 and then recovered over the next two years with further upward trend. However, in 2015, the market dropped slightly and retained this level in the next year.

Plywood (155M cubic meters), particle board and OSB (119M cubic meters) and MDF/HDF (97M cubic meters) were the most consumed product categories, together making up 91% of global consumption in 2016. Consumption of veneer sheets (4%), hardboard (3%) and other fibreboard (2%) held small shares in the market.

The shifting of potential market opportunities from developed countries to developing ones has been one of the main global trends in the wood based panel market over the last few years. While the economically mature markets of the U.S., Canada, and Western Europe are expected to have a modest pace of housing starts, the fastest growing Asian countries such as China, India, Indonesia, Vietnam are expected to continue growth due to rising urbanization and disposable incomes. The other emerging economies, such as Russia, Brazil, and Eastern Europe appear to have potential of growth, but it is restrained by lack of investments and the shrinking of consumer spending due to an economy slowdown.

The world economy is expected to experience fundamental changes, supported by decreasing oil prices, the slowdown of Chinese economy, and the deceleration of the world trade. However, the demand from downstream industries in largest consumer countries is forecast to remain positive, backed up by wide product use, increasing regional integration, and positive conditions for wood-based panel manufacturing. The Asia-Pacific region will remain a key growing market. Despite the slowing pace of construction in China, the expansion of China's economy continues to be significant, similarly to other rapidly-growing countries in the region (including Indonesia and Malaysia). The U.S. is also an important market, with a steady expansion in construction, combined with the stable levels of employment and the rising incomes, leading to an increasing demand for wood-based panels. In general, the global wood-based panel market is expected to continue to grow by +1.5 annually in the medium term which will lead the market size to 467M cubic meters by the end of 2025.

Wood-based panels output grew by 45% from the outset level

Production of wood-based panels reached 410M cubic meters in 2016, with an upward trend over the last seven years. This resulted into an increase of +45% from the outset level. In 2010, global wood-based panels overcame the pre-recession production level of 2007. In value terms, the production flattened at $161B in 2016 after a 7% drop recorded in the previous year; prior to that it increased robustly from 2010-2014.

China was a major producer of wood-based panels

In China, production levels increased by +10.4% annually from 2007 to 2016, largely attributed to favorable economic conditions and growth of construction market. The other major producing countries showed mixed dynamics of wood-based panels output in physical terms. In 2007-2016 annual growth rates were especially high in Turkey (+6.5%) and Russia (+4.1%). Germany (-3.7%), Canada (-2.1%) and the U.S. (-1.1%) were major producing countries with an annual decline of wood-based panels output.

Wood-based panels is a widely traded commodity. The share of imports in global consumption stood at 21% in 2016. Despite the fact that the share of imports decreased noticably by 7 percentage points over the last nine years, the market is still highly dependent on imports. High trade intensity is determined mainly by the substantial distances between the main centers of wood-based panels manufacturing countries and key consuming countries.

Particle board, plywood and MDF together made the vast majority of world exports

Particle board and OSB (29.9M cubic meters) and plywood (29.5M cubic meters) constituted the largest product categories in terms of exports, each comprising 34% of the total exports in 2016. Exports of these products recorded a slight growth in volumes from 2007-2016: the average annual growth rates stood at +0.8% and +1.0%, respectively. MDF/HDF lagged somewhat behind, accounting for a 19% share of total exports and expanding with a CAGR of +1.8% over the same period.

In 2016, the volume of global wood-based panels exports totalled 87.5M cubic meters, expanding robustly from the bottom point of 2009. In 2013, exports recovered from a slump caused by global financial crisis of 2008-2009 and then continued to increase gradually. In value terms, it fluctuated near $34B from 2011 to 2016.

The U.S. continues to lead the globe in terms of imports of wood-based panels

The volume of global imports totalled 85.2M thousand cubic meters in 2016. In terms of dynamics, imports were generally in line with exports: these trade flows globally complement each other. In value terms, the total imports stood at $34.9B in 2016, this figure remained relatively stable over the last four years.